French artist Camille Henrot won the Silver Lion of the 55th Venice Biennale which is awarded, each year, to the most promising young artist. 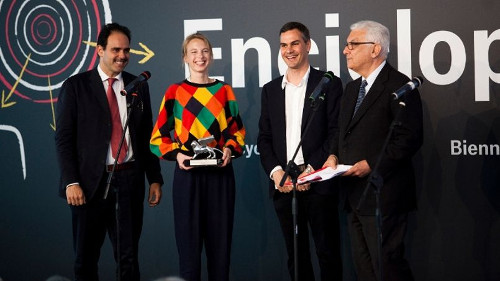 Camille Henrot presented at the International Art Exhibition a 13-minute video entitled "Grosse fatigue" (2013), which tells the story of the world through a series of screenshots on a computer on a very slam pace. This sensitive and poetic work confirms the singularity of the subject and Camille Henrot’s knowledge of art.

Both anthropologist and collector, Camille Henrot is interested in the origin of the Egyptian pyramids, in the pilgrimages in India, in literature, and in African music. She reinvents stories gleaned from the web, in literature and in life.

Born in 1978, Camille Henrot is a graduate student of the Ecole Nationale Superieure des Arts Decoratifs. She was selected for the Marcel Duchamp Award in 2010. In 2012, she took part in the Triennial at the Palais de Tokyo in Paris. In 2004, she presented her work in a « Maisons folies » in Lille which was chosen as the 2004 Capital of Culture.

She is currently working on several solo exhibitions in the United States, including one at the Baltimore Museum of Art.