“My cooking opened me to life” 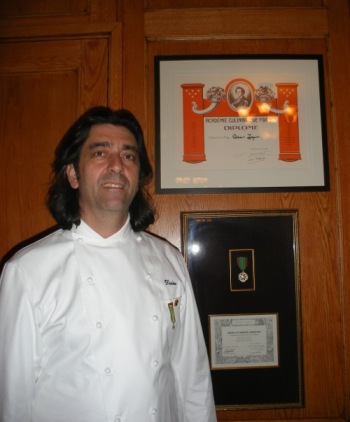 Didier Leroy arrived in Canada twenty years ago from Paris, where he had been working as Chef at Michelin-starred restaurants. He worked his way up the fine-dining scene in Toronto, heading up kitchens at some of the city’s top establishments before opening his own, ‘Didier Restaurant & Catering’, (1), five years ago. He serves Classic Parisian Cuisine and is recognized by some of the world’s best and most influential chefs for maintaining the art of French cooking and technique. Chef Didier Leroy received the ‘Medal of the Chevalier de l’Ordre du Mérite Agricole’ two years ago, and in March of 2009, will be inducted into the Master Chef Association of France. Didier was nominated for this honoured membership by Chef Paul Bocuse, and will be one of only two master Chefs in Canada and one of about 450 worldwide.

In the Leroy family, cooking is indeed a serious art. Didier’s brother Sylvain is a Master Chocolatier/Pastry Chef and travels internationally training Chefs on new and proper techniques. He is also coach and mentor for the United States team at the ‘Bocuse d’Or’, the world cup of pastry competition held every two years in Lyon, France. Didier was born in Picardy, Amiens, in the Somme, and began his cooking career in Paris at the age of 14. He studied, practiced and cooked in Paris for 18 years, then made his move to Canada in 1988. His Toronto career began as a line cook at ‘Bistro 990’ but he quickly advanced to Head Chef Position at ‘Auberge Gavroche’. His final role as Chef before taking over his own space was at ‘The Fifth’, named Number One Restaurant in Toronto, 2000. Didier’s goal is to serve Classic French Cuisine using the freshest and most local Canadian product. “In Canada we can easily find all the products needed to make great French food”, he states. His menu is adapted to seasonal meat and produce and changes every four weeks. “Our clientele appreciates the fact that we renew our menu often, this allows me to continually work on different dishes and gives my young cooks the opportunity to become much more creative”, Didier says. The menu is a three-course, Prix Fixe including choice of appetizer, main course and dessert for $58.00. Bring your own wine corkage is $20.00 per bottle. The wine list is exclusive to France and Canada. Chef Didier’s food is served on Porceline de Limoges, and eaten with Ercuis silverware. Didier compares his restaurant to, “a small flower in a parking lot”, and has a precise vision of his mission: “To bring French culture to the heart of Ontario”. His numerous awards and distinctions prove his investment. The, ‘l’Ordre du Merit Agricole’ in 2008, member of ‘l’Academie Culinaire de France’, and the ultimate for Chef Didier, ‘Maitres Cuisiniers de France’ – this ceremony to take place in Lille alongside his Godfathers Paul Bocuse and Roland Passot!

From gastronomy to philosophy

Didier is at the restaurant each day, working the line for lunch and dinner service, along with daily purchasing for the restaurant, but he still finds time for another of his passions, philosophy and the study and practice of Buddhism. He is a member and leader of Soka Gakkai International and teaches at SGI’s Culture Centre, (2). “I want to help people to appreciate life, both in joy and sorrow”, he explains. Didier would love to open a school to teach cooking and philosophy together. “I would like to guide the youth who are lost”, he says. It has been 38 years since Chef Didier Leroy donned his first Chef’s jacket, and he continues to wear his uniform proudly. “My cooking opened me to life!”, he repeats, smiling broadly.

The Christmas recipe from the chef:
Honey Roasted Chestnut Soup

This is a full-flavoured, silky-textured puree perfect for festive holiday dinners. Serves 4

2-3 dashes each salt and black pepper

1. Cut a small cross through the top of each chestnut shell then place in large, shallow baking dish and bake at 400 degrees for about 15 minutes or until nut shells pop open. Remove shells when cooled and in large skillet over medium heat, sauté with honey until chestnuts are caramelised. Set aside.

3. Set aside three chestnuts for garnish and add remaining to soup base. Cook at medium-low heat for 15 minutes.

4. Transfer soup, one ladleful at a time to kitchen blender. Puree then frappe each amount until smooth consistency is achieved. Strain from blender through chinois or tightly meshed strainer into clean saucepan and heat just until steaming.

5. Ladle soup into shallow bowls and garnish each centre with one rounded tablespoon of crème fraîche, one half chestnut and a drizzle of honey.