Win a pass to all the films My French Film Festival

From January 16 through February 16, 2020, film lovers around the world will be able to access films selected in the 10th edition of the world’s first online French-language film festival. The concept

Ten feature films and ten short films are presented in competition, including two features and one short from Belgium. Internet users are invited to rate all of these films and to post their comments on our website. The lineup also includes a Swiss film shown out of competition, a program for young audiences, a VR section, and special screenings.

How can you watch the films?

Online: On the MyFrenchFilmFestival.com platform in all countries. The festival program is also available on around fifty partner platforms, depending on the region concerned, including the Apple TV app.

In theaters: Film screenings will be held in theaters near you during the festival. All details on theater locations and screening times will be regularly posted on our website.

On airplanes: MyFrenchFilmFestival will also be available for airline travelers, with films shown on Air France flights for a period of six months. Here too, all details will be posted on our website.

Three awards will be presented at the closing of the festival:

Lacoste Audience Prize Internet users around the world can vote for their favorite films on the festival platform.

International Press Prize With a jury composed of journalists from the major international media outlets.

The Grand Jury and the International Press Jury will meet in Paris during the festival to elect the winners. Award-winning films will be screened on Air France flights for a period of six months starting in the summer of 2020.

All of the short films are free of charge in all countries. Viewing fee for one feature film: €1.99 Festival Pack: €7.99 for access to all available films 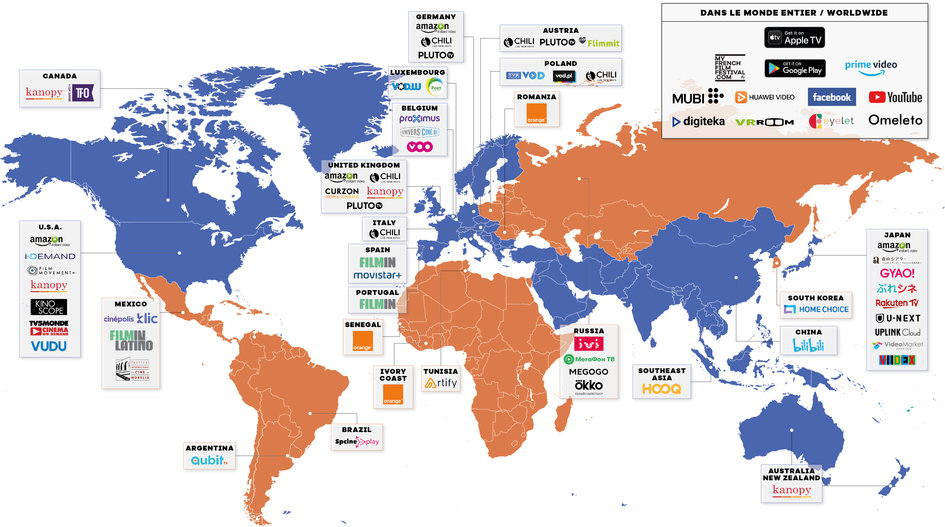 In canada, TFO is a partner of the 10th edition.