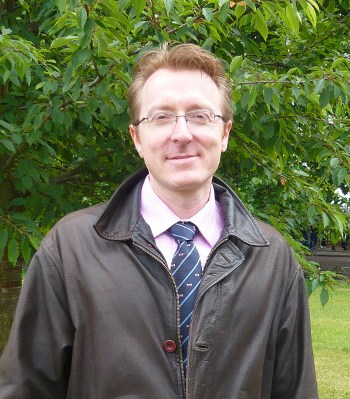 Christian Pagnoux, a passionate, committed and unconditionally motivated doctor, describes his journey as a constant desire to grow, improve and go a little bit farther and a little bit higher each time. Originally from Tours, in Indre-et-Loire, he studied at the city’s Faculty of Medicine, University François Rabelais, for six years. Then, in 1995 – after completing the competitive national examination, a requirement for residency – he worked in numerous Paris hospitals during his internships.

In 2000, Christian joined the internal medicine group led by Dr. Guillevin, founder of the French vasculitis study group. For Christian Pagnoux, this experience marked the true beginning of his involvement and his commitment to learn all about vasculitis-related diseases. For those who are not familiar with the term, it might be difficult to understand or imagine the meaning behind this somewhat obscure medical term. Vasculitis refers to autoimmune disorders which are characterized by inflammatory destruction of blood vessels. Once part of the group, Dr. Pagnoux wrote his thesis on the topic and contributed to numerous publications by the French vasculitis study group whose esteemed reputation on the international scene is well known. It was therefore not a surprise when the young doctor was soon contacted by a group of Canadian doctors who were interested in the French initiative in this field and who were looking to invite a specialist from whose experience and expertise they could benefit. Christian Pagnoux accepted without hesitation: “The timing was perfect and also, I have always had so much admiration for North America.”

As soon as he arrived in Canada in June 2010, Doctor Pagnoux joined the Department of Rheumatology led by Dr. Simon Carette at Mount Sinai Hospital in Toronto. His goal was clear: to create a Canadian network of expertise on vasculitis with the view of optimizing the patient case management. A year later, CanVasc (Canadian Vasculitis Network) was created and referring physicians were identified across Canada.

The first annual CanVasc meeting will take place on June 10, 2011 in Toronto and is expected have some fifty participants. “The objective of this network is to raise awareness about these disorders but also to educate physicians through different educational programs about the patient case management.” Thanks to the experience gained while working with the French vasculitis study group, Christian Pagnoux is able to evaluate the impact of his awareness campaigns and knows well the results that these initiatives can produce: “Since the creation of these groups some twenty years ago, the diagnostic wait times have been considerably reduced and the patient prognosis has been significantly improved.” In addition to the network, there is continuous collaboration with the patients’ association Vasculitis Foundation Canada. The president of the Foundation will also be present at the conference in June and will discuss the association’s expectations in terms of the network creation. “It is truly important to keep a constant link with the patients’ associations. That’s what stimulates us!!”

After just one year in Toronto, Dr. Pagnoux has already made great strides. He is technically supposed to return to France in June 2012, but who knows, perhaps he will stay longer.

Whatever his decision may be, research on vasculitis will not be abandoned: “In any case, I wish to create links between the two countries and to establish a France-Canada network of research in this field.”

(PDF format) (The conference is reserved for doctors and medical professionals)