Six veterans of Second World War who actively contributed to liberate North West Europe have been recognized by the Government of France by being awarded the prestigious Légion d’Honneur. The presentation of awards by M. Daniel Jouanneau, the French Ambassador in Canada took place in Toronto on Wednesday, March 28 at Moss Park Armoury, the Home Station for the Queen’s Own Rifles of Canada. The Veterans and their family and friends, current members of the Queen’s Own Rifles Regiment, representatives of the Ontarian government and of the city of Toronto, and M. Philippe Delacroix, French Consul General in Toronto, attended the presentation. 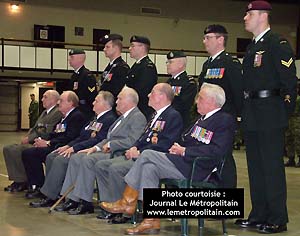 The French Legion of honour is a civilian and military decoration, instituted in 1802 by Napoleon Bonaparte. The order is conferred for outstanding achievements in military or civil life. Four of the honourees (Profiles enclosed) were among the Canadians who landed on the beaches of Normandy on D-Day, 6 june 1944, one was in the Dieppe raid in 1942 and one later became Defence Minister in the Trudeau Cabinet.

French Ambassador Daniel Jouanneau, in notifying each of veterans of this honour, wrote that : “On behalf of the President of the French Republic, I would like to express my heartiest congratulations upon having received such an honour. This medal is a reward you greatly deserve for the exemplary and outstanding behaviour you demonstrated during fierce battles of the liberation of France and Europe. By awarding you such a high distinction, France wants to honour the great Canadian Soldiers who fought for freedom.”